The "status line" (status bar) at the bottom of the working area of TARGET gives important information with regard to the active window.

Image: The sataus bar in schematic view at the bottom of your screen.

The second column of the Status Line shows the current scaling factor in percentage of the active window. 100% means a display in world coordinates. 10cm in the PCB represent exactly 10cm on the screen. You could basically use a ruler to measure distances on the screen, but of course, there is a special function in TARGET 3001! used to measure distances. To do a dimension check on components, you can hold components physically directly up against the screen; however, to have an exact scaling of the window, the size of the current monitor has to be entered in menu "Settings / Settings/Options".

The third column shows information on how many Pins you have used currently.

The fourth column depends on the working mode. Here you can read about mouse button settings for the individual modes. After selecting a component in the working window with M1, the component's name and related signal name are shown. After selecting a track in the layout view with M1, its signal name as well as the related layer number are shown. Also, information about the grid and its settings can be found here.

If a track is selected or some segments of it, the status line with "S=..." shows the exact trace length of the sum of the selected segments. Especially for high-speed design, it is necessary to know the length of a track. The calculation also works if arcs or spline curves are part of the track. 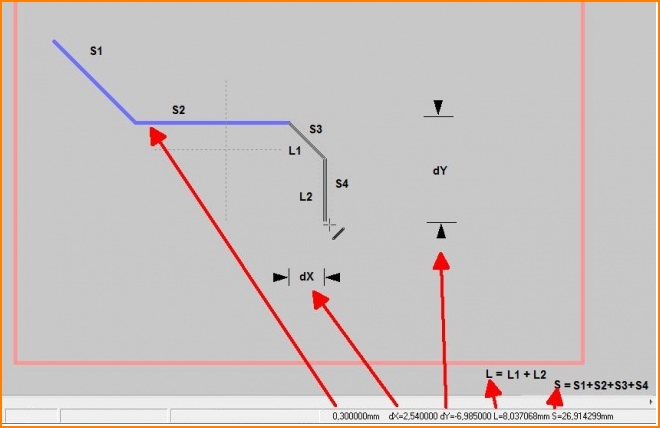 In an existing layout, if a piece of track is highlighted, the character R represents its resistance. Toggle between metric and imperial scale by the use of the [F4] key.