The "package generator" is made for easy creation of component packages including 3D view. It can be found in layout menu "Packages" and opens like this: 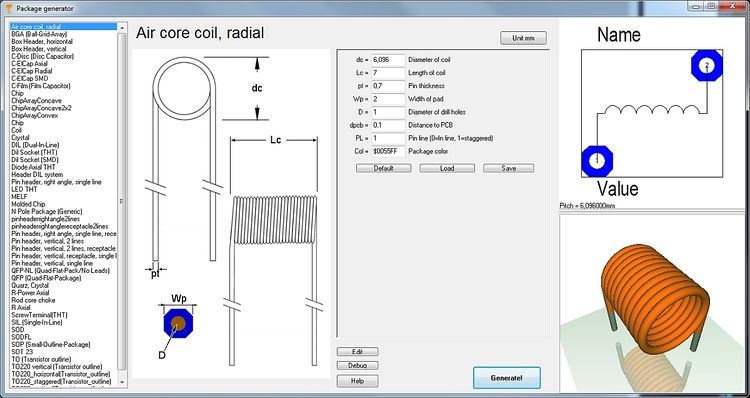 
The dialog consists of four sections. Starting from the left: A list of various defaults to the left where you select your desired type of component. Right beside a technical drawing containing the definition of the parameters of the part. Such a drawing can be found in every data sheet. This image can not be modified here. Right beside the technical drawing you see the list of parameters, where all values according to the specifications of the data sheet can be entered. It is the basis for how the package later will look like. The abbreviations left of the equal sign are the same as in the technical drawing left of it. Up to the right the package image can be seen the way it appears in the layout later. Below the 3D image is shown.

If you select a DIL (Dual-In-Line) from the list, the dialog changes the way that DIL parameters can be entered. 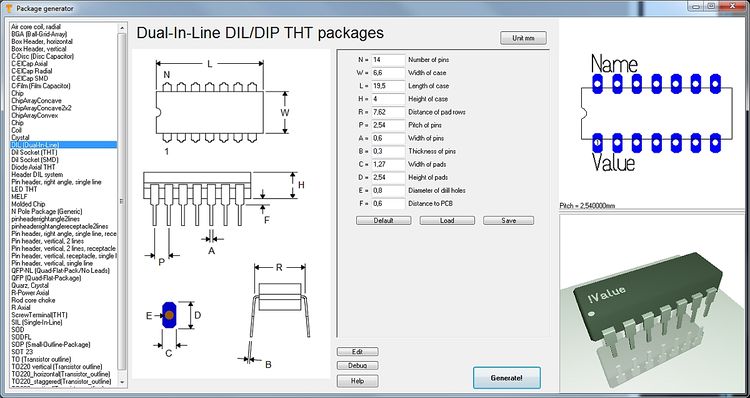 Image: The dialog for a DIL


The button Unit mm (top center) wants to make clear that there is no inch-scale here. The buttons Default, Load, Save in the center of the dialog refer to the set of values currently entered. One can save certain sets of values under an individual name and load them again. Or you might use the default setting. The button Generate! opens the well known dialog for saving the part to the data base. Component type, component name, package description and manufacturer can be entered as usual and the process is finished. 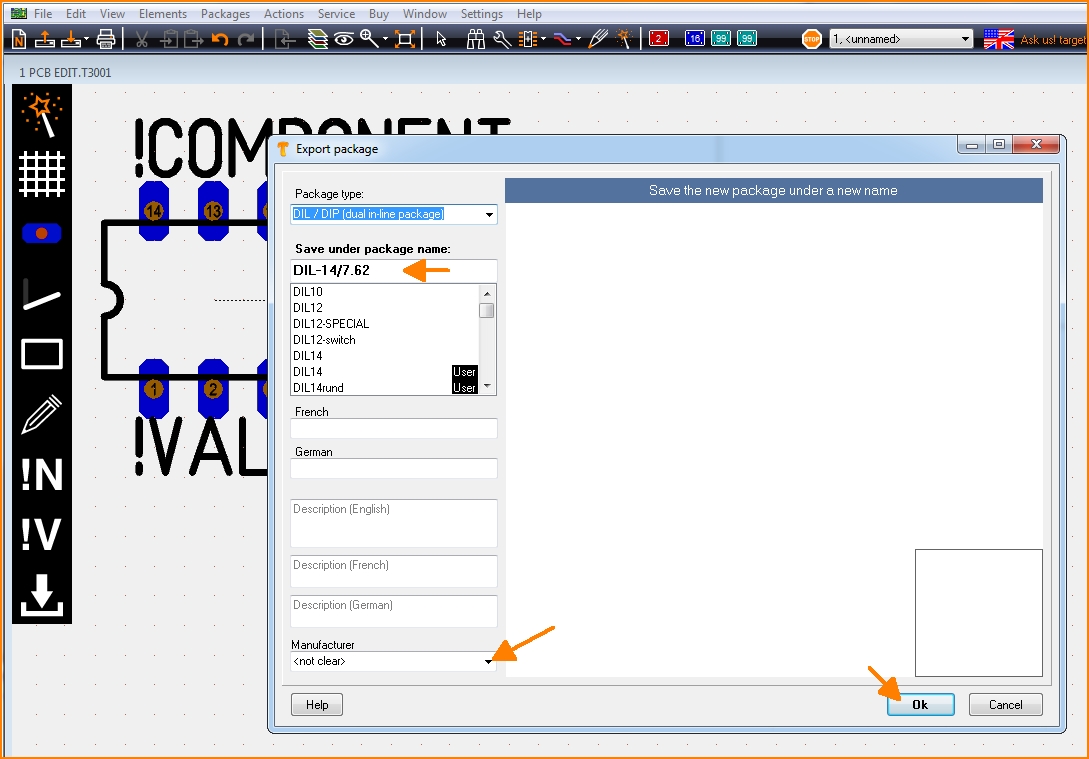 Image: Generate the desired package in order to save it under an individual name.

The more information you add to the dialog above, the better. You will find the package now in the range of designated package types by the particularly given name.

Quick creation of a package using the N-Pole type

The package types in the list top left are based on a script. You can establish a new component type by saving a new script to a certain TARGET directory. If you are not a programmer and don't like to create a script on your own for a part which isn't represented here, you might use the package type N-Pole. Find it in the list: 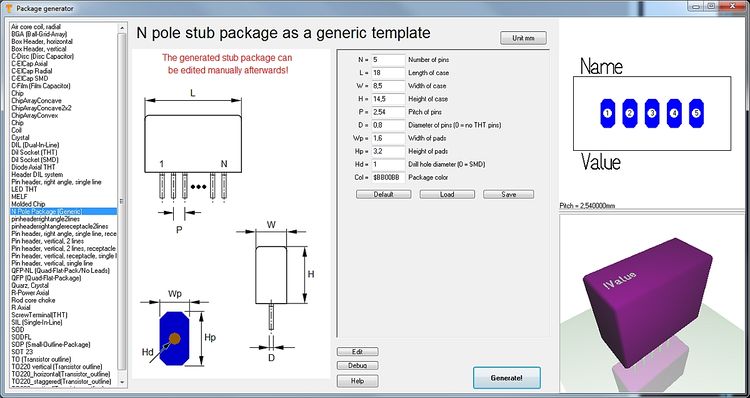 The idea is simply to have a package outline with a certain kind and number of pads in a row. You can import this "raw blank" to a layout, finish it correctly there by pushing the pads on their correct place and save it again under a certain name. It might be the fact that the package won't come perfectly from the generator but the generator itself already has done a lot of constructive work. Now you might do corrections in the layout and save the part again. As you might know in the layout you can refine any part at any time and save it again (overwrite it or save it by a different name).

How to create a package script

What is a package script?

Each component type which you will find in the list top left is based on exactly one script. So what you see in the dialog windoe when selecting a certain component type is defined by a script. A package script is a program which determins the geometrical shape of all drawing elements of a package. It is called script because it is stored as a text. So one does not create a script for one singular more or less complicated package but always for a package kind or type. A package type normally is built up according to special geometrical rules, only the number of leads (this is the easiest case) varies. View the script of package type by pressing the button:

You can modify each script, save it under a different name ("Save as...") and then use it. When opening the package generator dialog again, the new script can be chosen from the list.

opens the "Debugger" of the script. 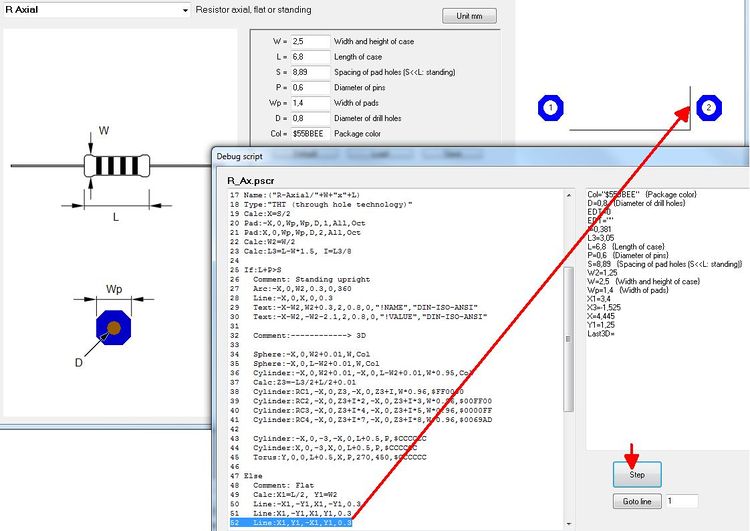 The "Step" button in the debug dialog allows a step by step (= row by row) walk through the script in order to see what each script row effects for the image(s). So if bugs in the script would occur, one can easily find them and fix them. In the above dialog for example row 52 is responsible for the vertical line on the right edge of the package outline.

The setup of a script by an example

For the component type SIL (Single-In-Line) the script has the following look (syntax to the left, explanation to the right):

Please note: The values of the variables for the current SIL package are denoted on the right hand side of the debugger dialog.

Every textual indication (=string) is embedded in quotes. Example: "Hello".
Coordinate indications are in metric scale [mm]. If you look on the X-Y-plane, the positive Z-axis points upward to the spectator.
Numeric characters are rounded to 1/1000.
Angle indications are in 0...360 degrees [°].
The rotational direction is CCW (=CounterClockWise). 0° is east. The right-hand-rule applies for all axes.
Colors are indicated hexadecimally according to $BBGGRR. B represents Blue, G represents Green and R represents Red.

Save and activate a script

A script is activated modified and saved in the Edit-Dialog. Directory of storage is:

To this place also the *.png image is saved which contains the technical drawing of the part in question. This image appears in the dialog to the left. It makes sense giving them the same file name like the script has (not a must).

Simply delete it from this directory:


With the next opening of the dialog it will be vanished from the list.

I have a question here