If you want to order the layout of a PCB project from an industrial manufacturing company, you will be asked for data in Gerber format. This means the so-called extended Gerber (RS274X), or XGerber, which is what TARGET generates. The old standard Gerber (RS274D), which is no longer a standard at all, is obsolete now and should no longer be used. The difference between the two is that Gerber RS274D needs an extra file for the aperture information. All aperture information is automatically built in to XGerber. Old Gerber machines that expect Gerber RS274D can still read the Gerber data from TARGET nevertheless. Creating Gerber data in TARGET 3001! is a matter of seconds.

Creation of Gerber data from TARGET 3001!

After you had finished your layout/routing work, please use the Menu File / Input/Output Formats / Production / "(X-)Gerber and drill output PCBout", or simply use functional key [F11] or in the layout view press this icon from the toolbar at the top

For the following explanations we use the demo project pic_3d.T3001 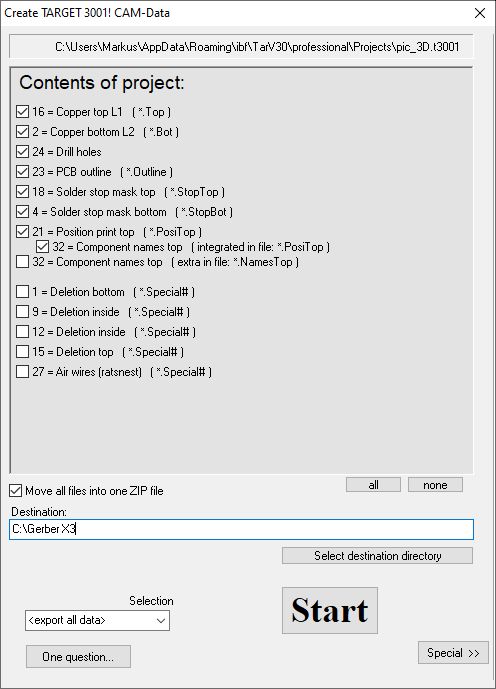 The list shows the Gerber files going to be created (see extensions in brackets) which will be sufficient to manufacture your board. The number and kind of Gerber data depend on the complexity of your project. TARGET recognizes it and puts the expected files to this list. The ones of which you tick or untick the boxes will be generated. Choose a destination directory for saving the files. Now press the Start button. That is all.

The XGerber data are generated to the desired directory. That's what they show up for this example: 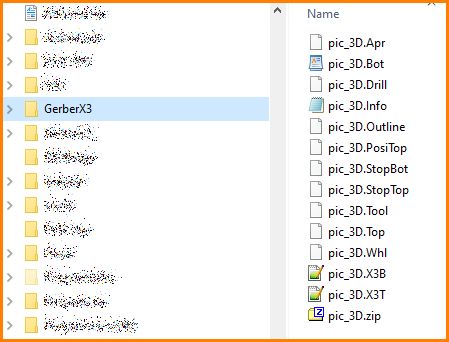 Image: These Gerbers are created from the Pic_3D.T3001 example file


Hand out those files to your PCB manufacturer. The *.zip file provided contains them all. The *.info file can be opened by any text editor and informs your PCB manufacturer in clear words which Gerber files are given regarding this special project. So he can check whether all files had arrived at him. For the project file in our example, the *.info file looks like this: 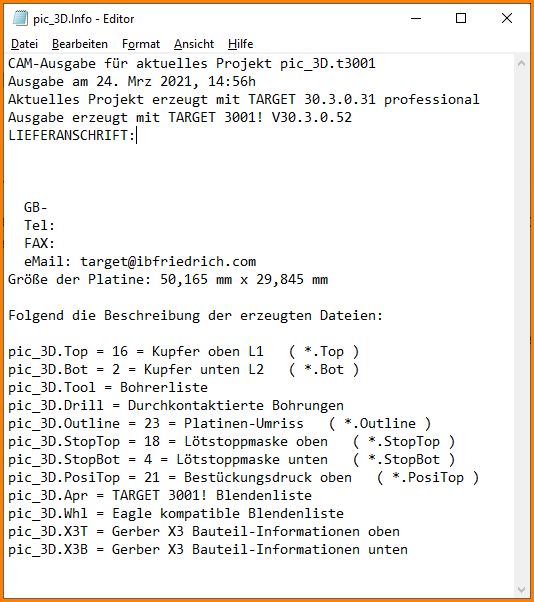 Image: Contents of the Gerber-Info file based on the project shown 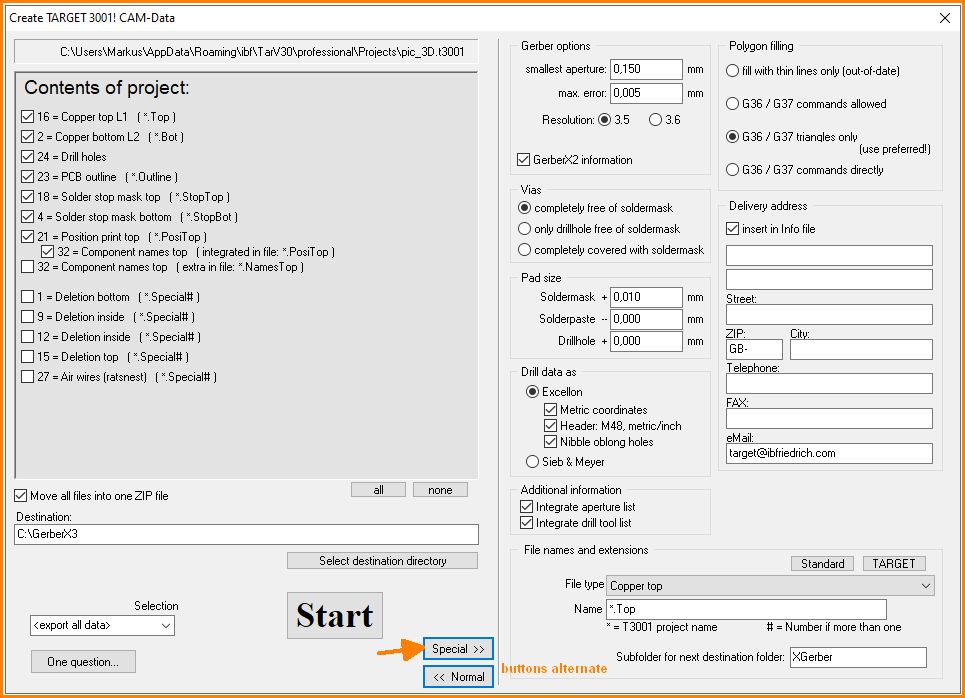 With button Special>> set further specifications if necessary. If your pcb house should ask Gerber files with different extensions from you please press the Special>> button. This will extend the Gerber dialog and at the bottom to the right give opportunity to choose different extensions (button "Standard").

from version 17.4.0.23 the order of the copper layers is numbered from top to bottom:

In earlier versions copper layers were counted from bottom to top.

please have a look here:
Sample Gerber files of a sample project

TARGET can automatically provide Gerber X2 information: check the box in the Special>> section of the Gerber dialogue. 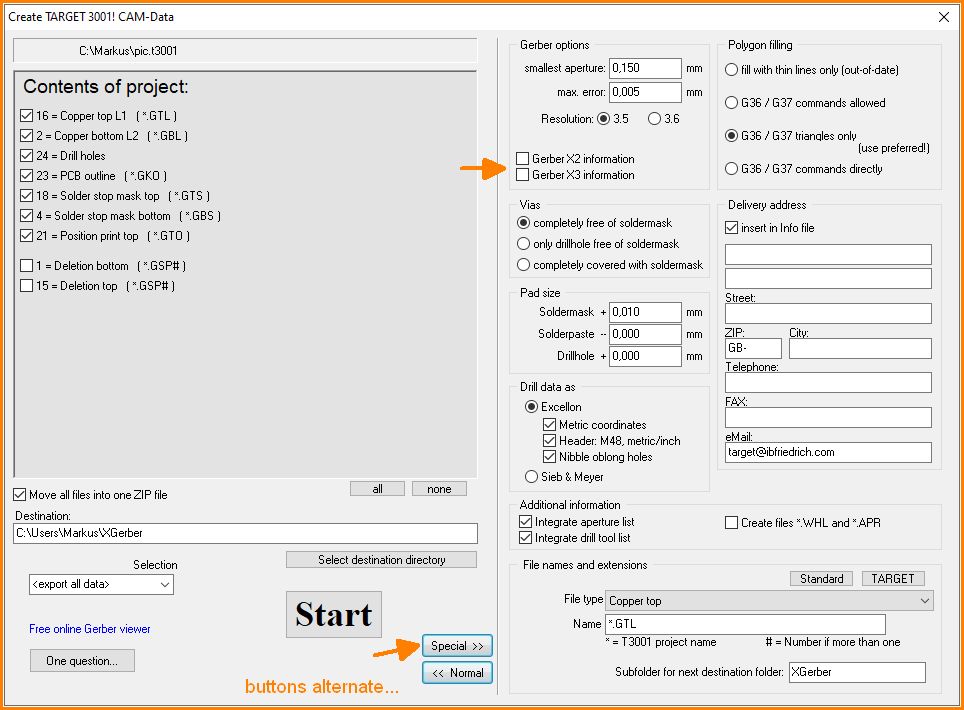 The Gerber files then give information about their content (e.g. copper bottom). All elements "know" which signal and/or component they belong to. This is very useful for e-testing. 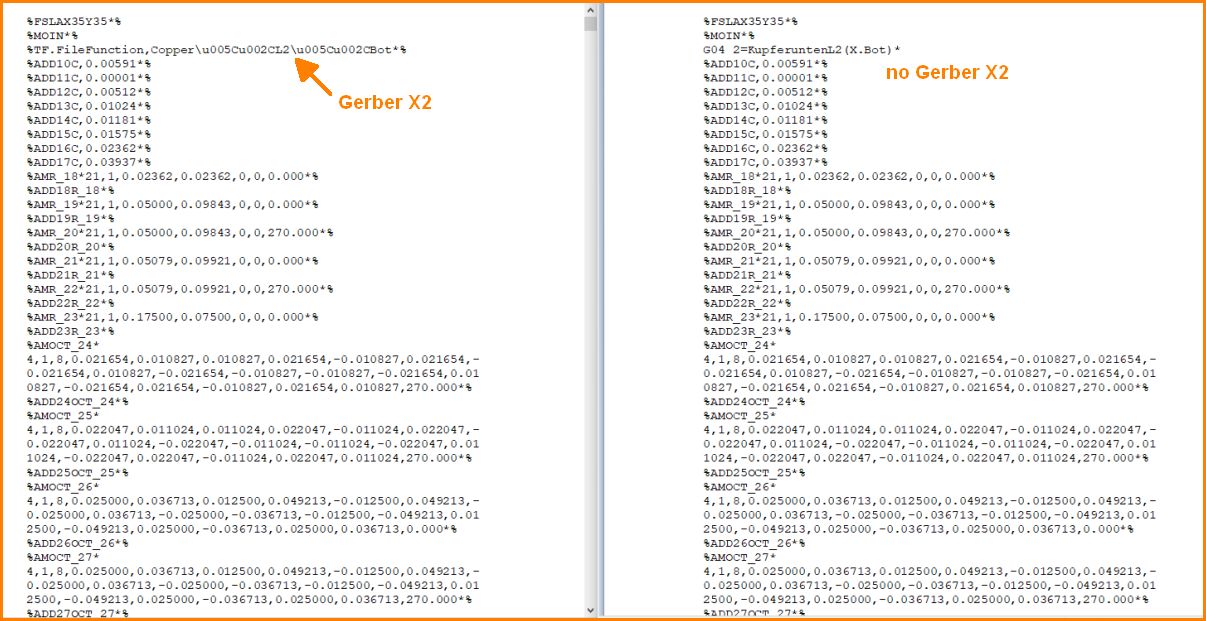 Also the Gerber X3 output feature is on board. Tick the box to have them generated (see diolog at Gerber X2 information). Gerber-X3 data additionally provide information for production, testing, ordering and (automatic) assembly. The Gerber-X3 format is free, open documented and easy to understand. It consists of two additional files *.X3B and *.X3T for assembly Bottom and Top. These are always included to the output. If not needed, ignore!

Component information are those being entered in the symbol change dialogue to the new Order No. button: Distributor and Order Number Double-click on the handle cross of a symbol in the sectoral plan to open the dialogue:

In the Gerber data both Gerber X3-Files appear. 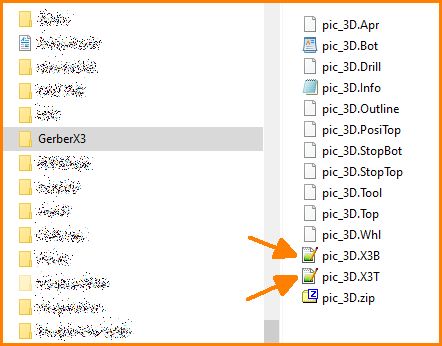 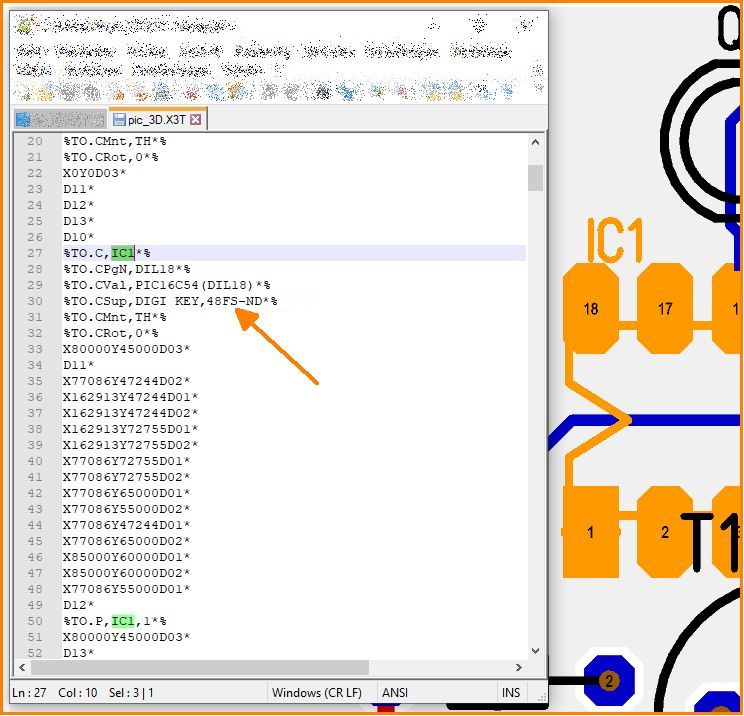 Please note: TARGET 3001! is not a Gerber viewer! The Gerber import is able to read files containing XGerber (RS-274-X) and Excellon data from various other CAD packages with the aim of importing them layer by layer into a TARGET project.

There is a wide range of excellent Gerber viewers on the web:

An X-Gerber file is a textfile which may have the following syntax:


An Excellon File (for the drills) also is a text file and for example looks like this:


In case your data look completely different, it's likely that you don't have XGerber or EXCELLON-data.

An XGerber file-name is overtaken to a line of the dialog and "noted" for conversion... 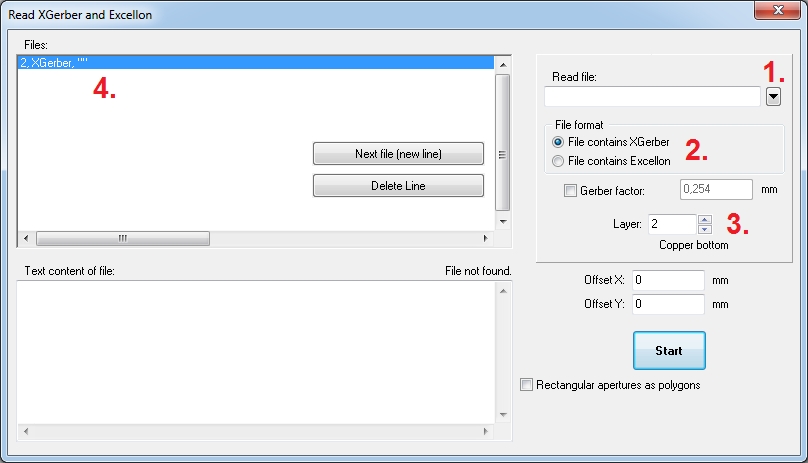 Image: This is the XGerber import dialog!

Button (1.) opens your Windows browser for the selection of one of your given Gerber files which you select from your folder. Now enter which kind of data (2.) the file contains. Afterwards define by (3.), to which layer in TARGET 3001! the data shall be transferred (e. g. layer "2, copper bottom", "24, drillholes"... ). Now see the file already listed in the first dialog line (4.). Now click on "New line". TARGET 3001! now is ready for reception of a new file to a new line (=layer) and you start with 1. again to pick the next data file.


If you click button: "File contains Excellon" in the box "File format", you'll get the option "Excellon Factor". So you can take influence on the drill data. How big the factor needs to be set is a question of trial and error. The same with "Gerber factor" if you had ticked the XGerber file format. Press "Start" to convert the selected files.

If your Excellon-File doesn't give Information on the diameters of the drilling tools, but you know the diameters, you can simply precede the Excellon syntax with a simple text:

M71 switches over to "mm". A "T" is followed by the number of the tool e.g. 1...17. After the "C" please find the tool diameter in mm. The dot separates the decimals. The initial file started with "G90" . M72 switches back to imperial unit (inch), which is the standard setting in EXCELLON.

Problems with the import of X-Gerber

Please have a look here:
Problems with the import of X-Gerber

XGerber (RS274X) carries all aperture information in its genuine layout file. In case you are using the older standard Gerber files (RS274D) for reading in, you must have (identify) the aperture file delivered and need to have it interpreted by TARGET 3001!. Those aperture files do not have a standardized structure at all. Neither the file extensions nor the information within the file itself. Fortunately at least all files (Gerber-, aperture, drill- and drill tool files) are bare text files easily to be read by normal text editors. First open the import dialog in Menu File/Input-/Output formats/Data exchange/documentation/Read XGerber and Excellon files... 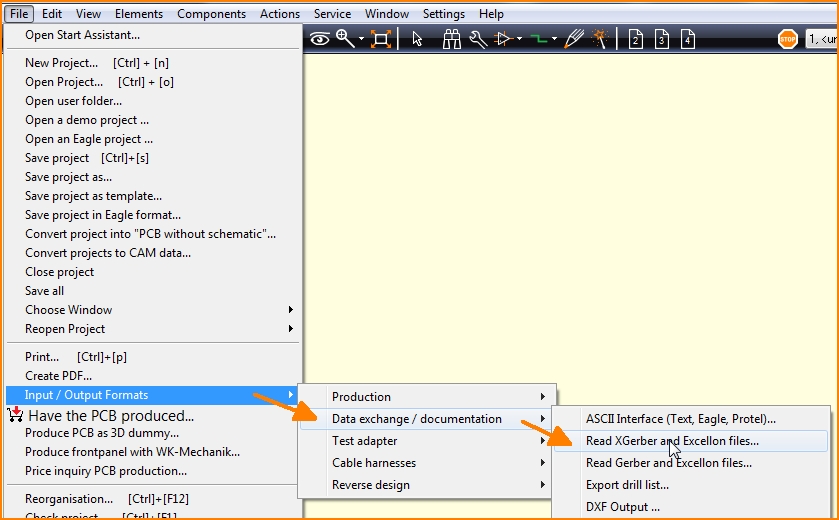 Now you read in each of your images line by line to a separate layer. Define which file you want to read in first and say to which layer in TARGET you want to import it. The answer to the question which of your file contains which information needs some experience and some testing. Sometimes there is a descriptive info-file. Copper top often is denoted by TOP or T within the file name, copper bottom often is denoted by BOT or B.

Image: Same dialog as above.

Search for your Gerber data within your directories ("Read file", top right). In this example we choose/destinate layer 2, copper bottom. 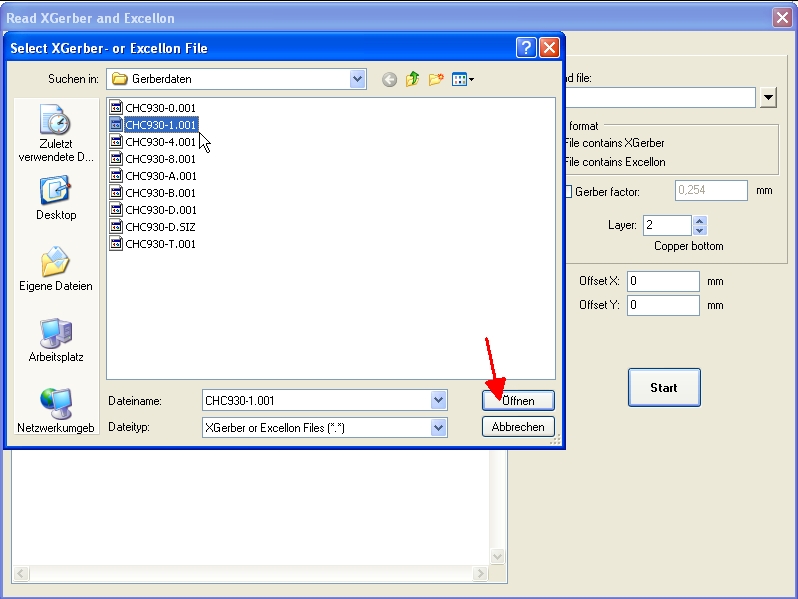 We do the same with the next file... 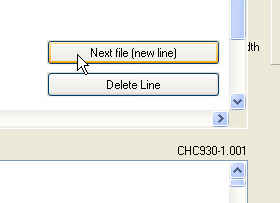 ...which contains data for copper top. Import it to layer 16, Copper top. 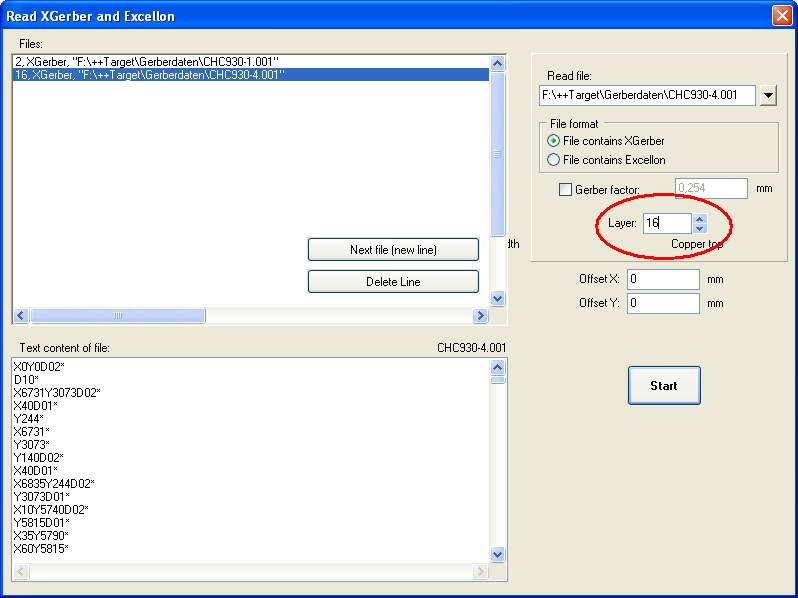 If you press the START button, you get asked whether you want to search for an aperture file which defines the so called "D codes" because at this time D codes are not sufficiently defined yet. D codes care for size and shape of the apertures which get moved in front of exposure to light. Gerber data control those moves. The aperture file is a kind of description of the exposure tools while Gerber files say what is to be done with them.

Press button "Yes" and search and select from your file set the one which keeps the aperture information. 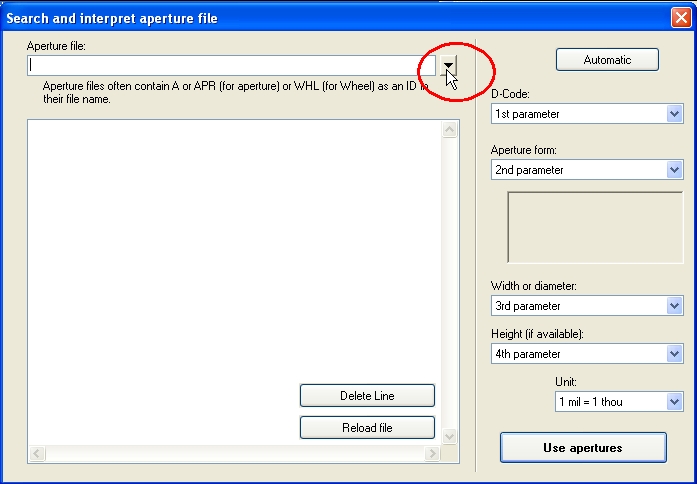 Aperture files often can be identified by an A or APR (aperture) or WHL (Wheel=aperture wheel) in the file name. 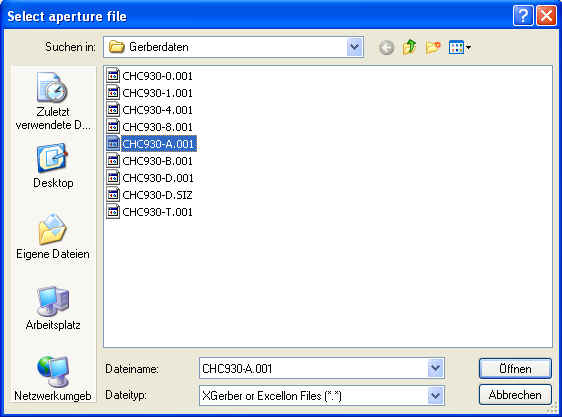 After you have selected an appropriate file a dialog opens allowing the interpretation of the aperture data. Aperture data often consist of a header and eventually of an appendix. Both can be deleted. Only those lines are of interest which contain D codes D10,D11,D12... 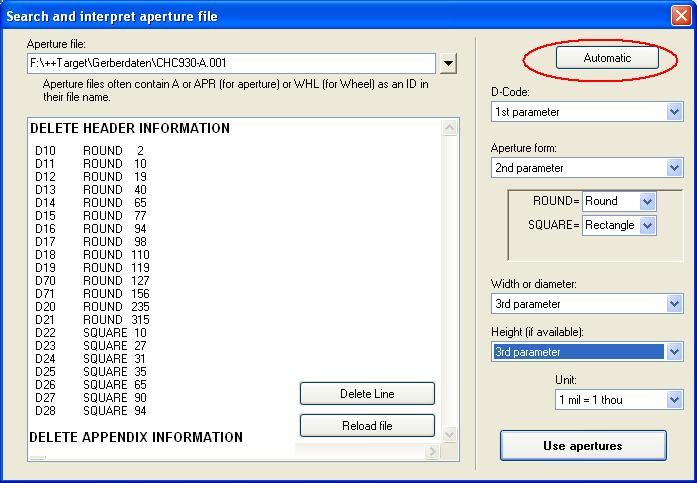 The structure of D codes is not defined. The image only shows an example. Look at a D code line and now interpret it column by column. The button Automatic helps finding a preselection. In our example the first parameter defines the d code, the second the shape of the aperture (ROUND or SQUARE), the third parameter defines width and diameter of an aperture. Because we don't have a fourth parameter "Height"we set it "3. Parameter" too. In which scale your your gerbers come across please set in the last box. If the sequence of your parameters match, please press button "Use apertures". Now see your copper bottom and copper top layout in TARGET 3001!. 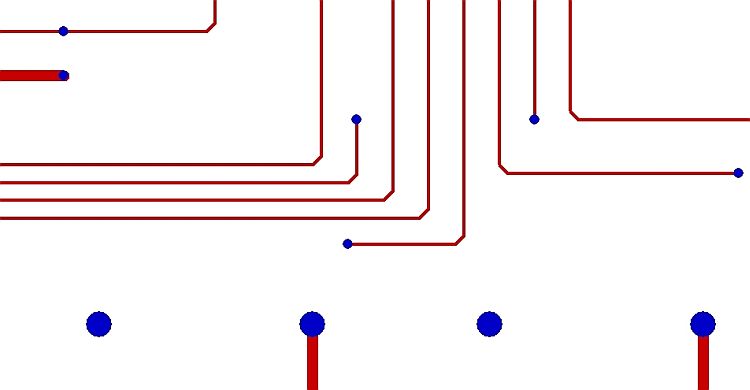 Using this tool (File/Input/Output Formats/File transfer/Documentations/Read Gerber and Excellon files) you can view the Gerber (RS274D) data of your project before producing a PCB. The Gerber data are directly read into a TARGET project. By selecting the PCB layers set visible, the corresponding views can be seen and checked with the TARGET project in separated windows besides each other. Additionally you can import Gerber data from other layout CAD packages and edit those within TARGET. 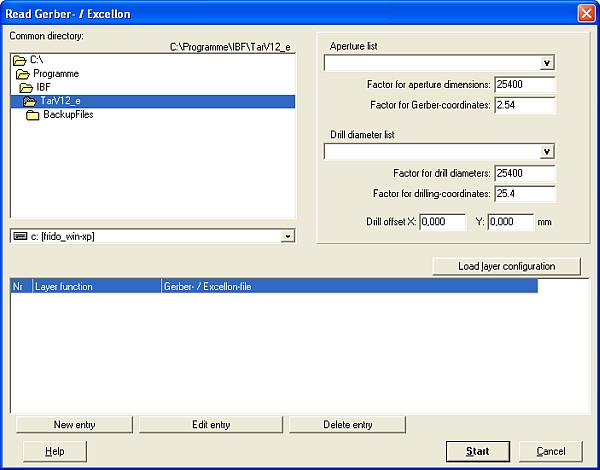 REMARK: Gerber data concerning the layer "solder stop" should be read in from another layer than "Solder Stop Bottom", because TARGET recognizes the pads of the Solder Stop Layer automatically by activating them in the normal layer dialog. Gerber data of the solder stop layer with topping of the vias are ignored then or dominated by those "recognized".

If the external CAD format you need concerning the aperture and drilling list not is offered by TARGET, please describe it to us (evtl. using an example - file). We add all formats you drop to us into the list as we estimate it reasonable.

What's the difference between Gerber and G-Code?

G-Code and Gerber are similar but describe different things: Gerber describes the drawing of a PCB layer. A command in Gerber mostly results in a piece of a track or in a pad. G-Code mostly is used for controlling milling machines. A command in G-Code normally results in a movement of the milling bit.

Regarding isolation milling, moving the milling tool inside tracks and pads would destroy them. The movement has to be outside along the tracks and pads to create isolation channels all around. TARGET 3001! is able to compute the G-Code for PCBs, regarding the milling bit diameter and the track widths. Because TARGET 3001! can also import Gerber files, it can be used as a universal Gerber-to-G-Code converter.

G-Code can be created in TARGET 3001! by the menu option: 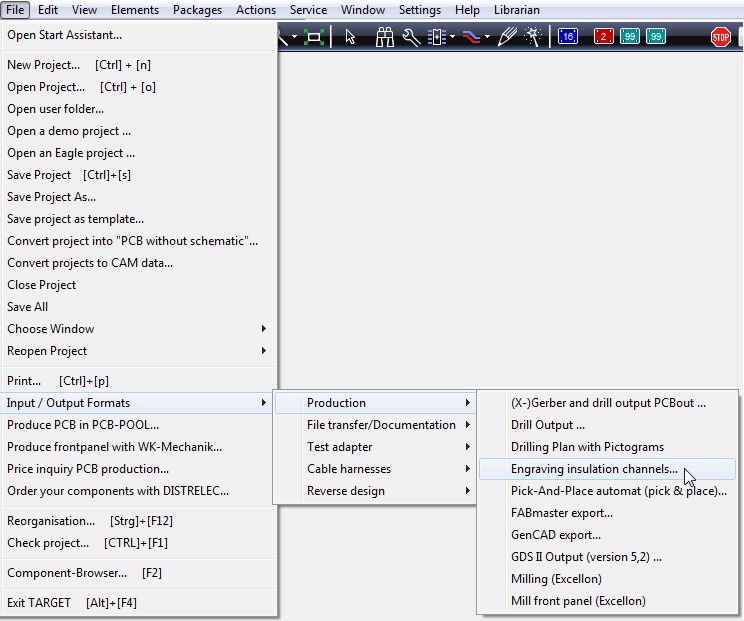 This menu entry opens the following dialog where you can opt for G-code as output format. 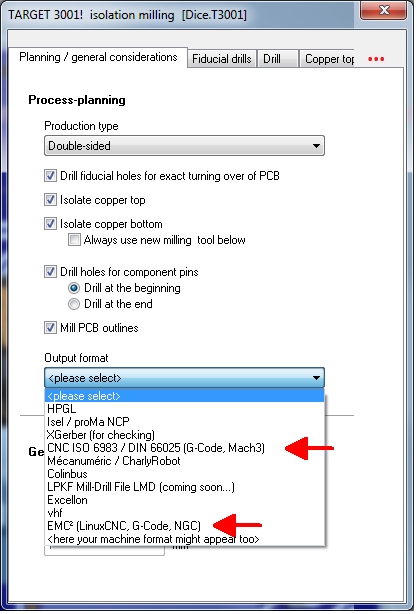